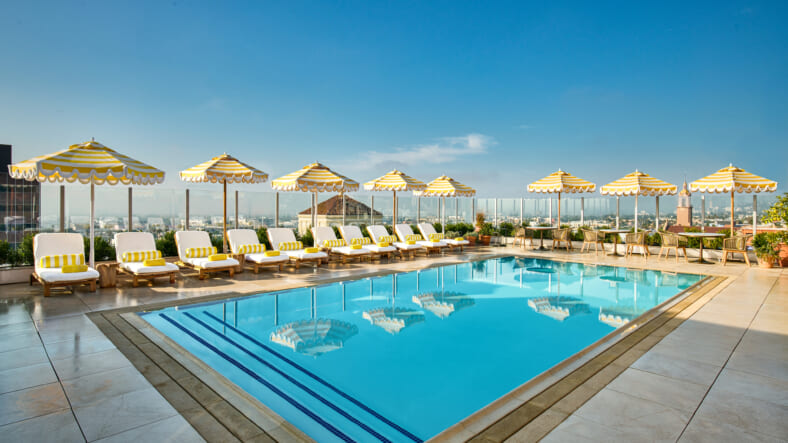 When it comes to Los Angeles luxury hotels, Beverly Hills, West Hollywood and Downtown L.A. are the neighborhoods of choice for discerning travelers these days. But with the new Thompson Hollywood, the famed Thompson Hotels brand aims to expand their horizons, with a bastion of “global sophistication, hyper-local immersion and intuitive service” around the corner from the lively intersection of Hollywood and Vine.

Dan Daley, Partner at Relevant Group, the developer of Thompson Hollywood, tells Maxim that Thompson Hollywood “brings the next iteration of dynamic and sophisticated hospitality offerings to the area, from the hotel’s rooftop Bar Lis to the soon-to-open Mes Amis [restaurant]. The evolution of the neighborhood is tremendous; Hollywood has historically been perceived solely as an entertainment district but with the increase in development and world class chefs in hotels we’re seeing an explosion in demand in the area.”

With Thompson Hollywood, Daley declares that “we’ve created a space for a new generation of creators in search of an environment to live, work and play in one compact complex.”

The hotel’s overall design is “bold and confident,” according to the hotel group, “drawing upon a mixture of West Coast Modernism with a playful dash of old-school Hollywood glamour, whilst maintaining a contemporary and elegant approach.”

That’s achieved through lots of layers and textures, a curated collection of original artwork, and a mix of contemporary and Mid-Century furnishings.

Steinberg Hart is responsible for the architecture, which has a bit of an industrial edge, while London-based interior designers Tara Bernerd & Partners created the decor, with Ten Five Hospitality overseeing food and beverage.

The 11-floor property features 190 guest rooms, including 16 suites; a top-floor pool with unparalleled city views; and Bar Lis, a hip rooftop bar and lounge that has quickly become one of Hollywood’s hottest hangouts—Rita Ora, Diplo, Robert Pattinson, Anya Taylor-Joy, Dylan & Cole Sprouse, and Malia Obama were among the early visitors.

Throughout the public spaces and guestrooms, Steinberg Hart installed floor-to-ceiling windows which flood rooms with natural light and offer sweeping vantage points of the Hollywood Hills and beyond. Guest baths feature walls and vanities finished in terrazzo, contrasting with tiled floors; and one of our favorite amenities is the exclusive D.S. & Durga bath products. An honor bar, Egyptian cotton bed linens, and 55-inch smart TVs round out the luxe conveniences.

The lobby is clad in timber with a terrazzo floor inlaid with a brass pattern, inspired by the West Coast Modern movement, alongside bespoke Tara Bernerd & Partners-designed rugs. The furniture is a mixture of Mid-Century antiques and contemporary pieces, and the “juxtaposition of industrial finishes with rich fabrics and textures” plus oversized artwork establishes the design ethos of the hotel.

The Lobby Bar is a welcoming refuge for cocktails for those who don’t quite want the nightlife vibe of the rooftop Bar Lis; it is also open at all hours and though there is on occasion live music, it’s a quieter spot. “Playing to the symmetry of the room,” L-shaped banquettes are set into the step-up on each side of the bar, while vintage-inspired stools and chairs surround coffee tables set in front.

The bar itself is a made of green onyx, with classic high bar-stool seating. The top half of the bar is an open brass frame showcasing a wide range of top-shelf spirits. Tobacco brown is a dominant element of the color palette, with pops of petrol blue, burnt orange, and vintage-inspired patterns and textiles, books and objets creating a warm, visually-interesting space.

Up at the top of the hotel is Bar Lis, the French Riviera-inspired rooftop lounge with wraparound views of Hollywood and Greater Los Angeles, including the Hollywood sign; and The Terrace, an all-day spot for casual coastal California-inspired cuisine for breakfast, lunch, and poolside service.

Designed by Bernadette Blanc, Bar Lis is a sexy and cool space evoking the glory days of Brigitte Bardot in Saint-Tropez, with an upscale beachy feel and an array of vintage photographs.

“Chic without pretension…. capturing the iconic spirit and playfully sophisticated vibe of the Cote D’Azur” is how Thompson the new rooftop lounge, which has a dedicated entrance at street level and a private elevator (hotel guests can access it from the main elevators as well), and we’d concur. The menu encompasses inventive cocktails and sharable small plates, and there’s a retractable roof ensuring all-weather enjoyment.

There are both indoor and open-air spaces at Bar Lis, and a curated calendar of nightly entertainment ensures there is never a dull moment. DJ sets led by talent including Ashley Smith & Bec Adams (of Les Filles), Ana Calderon, Rick Trainor and Wade Crescent, are the main attraction; while every Tuesday from 8 pm on there is a popular modern-jazz night dubbed Jazz Eclectic LA.

On The Terrace, which also boats incredible city views, during daytime and early evening hours, a different array of cocktails and light bites is on offer, along with an extensive selection of rosé, is available under cover or poolside. The pool area also features a separate bar and and chaise lounges, and there is lush landscaping which makes you forget you’re in the middle of Hollywood.

Next up for the hotel will be the Martin Brudnizki-designed signature restaurant, Mes Amis, a modern French brasserie helmed by Lincoln Carson. It “draws inspiration from bustling cafés and brasseries from Paris to Lyon while reflecting a decidedly Southern California sensibility.”